Further up and Further In

Further up and Further In

If you are moving from the First Reflection into this section on the same day, you may want to take a break before proceeding. Remember that the goal is not to get through the retreat; the goal is to allow the retreat to get through you. Choose a pace that is most life-giving for you. You may even decide to break this retreat up into three different days.

Before engaging with this section, move your body and do something ​ that feels good for your soul. Practice making this a spacious time, unhurried, with plenty of room to breathe. Resist engaging with technology beyond what this retreat requires. Simply make yourself available to the God who loves you deeply. Hear these words from deep within you:

Celtic Christians call threshold moments “a thin place”. In these times of dislocation and disorientation, the veil between heaven and earth seems especially thin. We have the potential to see and hear God more clearly than before.

The disciples in John 20 were standing on a threshold in a very thin place. The past was gone, and the future had no shape or form.

Just a few days before, they had known exactly who they were and precisely where they were headed. They were the hand-picked band of brothers following Rabbi Jesus, and they were on a radical mission to change the world. On Sunday, Jesus was riding into town on a donkey, and the crowds were going wild. By Friday, they were laying their beloved Master in a tomb, and along with him, their barely-formed identities and shattered dreams. Dark clouds had gathered all around them, and there was nothing left to do but shelter in place behind locked doors.

The disciples had survived a severe storm before, but Jesus had been in the boat with them, albeit sleeping soundly in the stern. Now the waves of grief and the winds of chaos threatened to overwhelm them. They were seasick with fear and longing for the days when they could simply yell at Jesus, “Don’t you care if we drown?” If only their beloved Master would wake up, one more time.

Wake up, Jesus. Please wake up.

It is a natural cry of the heart when we lose a loved one. Please wake up. We want to see the light in their eyes and hear the cadence in their voice, just one more time. It’s a natural cry, but we do not expect it to be answered. Imagine then—if you can—the stunning shock of the disciples when Jesus stepped into the room in John 20. He was wide awake, and He said to His grief-soaked friends the same thing He said the last time they were drowning: Peace!​

Peace be with you!

Imagine the stunned silence, then the sudden rush of adrenaline and the now hilarious spin of disorientation in the moments that followed. Imagine the deep peace that began to settle in as Jesus breathed upon them the Holy Spirit. Imagine the pure delight when they realized that they still didn’t understand what He was saying, half the time. It was all so familiar, yet entirely new.

Now imagine that your name is Thomas.

You have somehow missed this watershed moment with the hand-picked band of brothers and the resurrected Christ. Imagine walking into the room after Jesus had disappeared and being ambushed at the door by 10 wild-eyed men who were probably both laughing and crying, “We have seen the Lord!”

Thomas had no idea that what he said next would define him in the annals of Church history and forever change his name.

I will not believe unless…

Perhaps we should agree to offer Thomas some redemption and from this moment forward call him Daring Thomas. He dared to show up as his unedited self in his community and tell the truth.

What would it look like for you to show up in your community as your unedited self and tell the truth today? In your family? In your ministry team? In the world? Take a moment to honestly consider this question.

The next three words in the passage after Thomas issues his ultimatum are easily overlooked, but they carry a world of weight:

Jesus let Thomas wander in the wilderness for one whole week.

A “gauntlet” is a glove that a warrior throws on the ground as a challenge. Whoever picks up that glove has accepted the challenge and is willing to engage. Imagine the tension amongst the disciples as Thomas’ gauntlet laid lonely on the ground. Jesus did not appear to be picking up what Thomas was laying down.

What were the other disciples doing during this prolonged pause? What was Thomas thinking and feeling as God sat silent for one week? (Remember, the disciples had not read the rest of the story like we have. They did not know what Jesus would do next, or when He would do it. The future was entirely uncertain.)

Now put yourself fully into the story. ​ Imagine that you are in the room with the disciples.

What do you see and hear during that week?
What are you thinking and feeling?
What longings are starting to surface?
Take time to become fully present in the scene.

Once you have become present in the scene, now imagine what happens next. Jesus once again steps through the thin veil between heaven and earth and shows Himself to the disciples. It’s almost as if Jesus gives Thomas a do-over, except this time He allows Thomas to write the script. Jesus greets the disciples as before: Peace be with you! Then our brilliant Master carefully repeats the very words that Thomas had thrown down seven days ago. Instead of using Thomas’ own words against him, however, Jesus gently turns Thomas’ challenge into an invitation. In an act of spiritual jujitsu, the warrior Jesus reaches out for Thomas and draws him close. 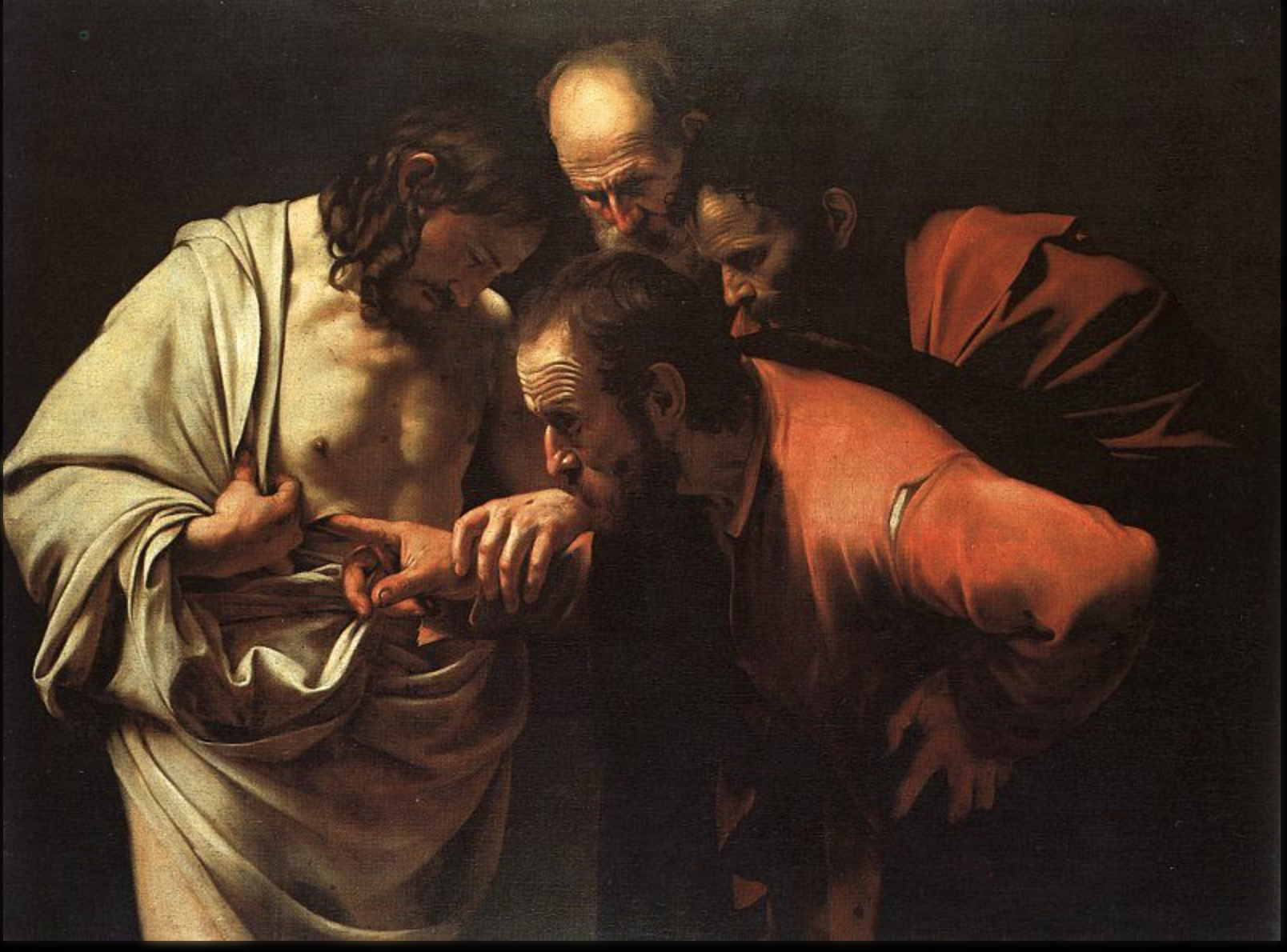 What do you notice in the painting? ​

What are you drawn to first? ​

What are you drawn to later? ​

What do you notice stirring in you? ​

Speak freely with the Lord.

As he does with Thomas, Jesus welcomes all of you: your doubts and disbelief, your outlandish proclamations, your feelings of exclusion or confusion, your agitation or impatience, or whatever else you may be. He meets you where you are and gives you what you need.

You can write down your reflections on this passage and this painting in your journal. ​ These questions may be helpful.